Summary from the Joomla! Code Sprint & CoderFaire in Nashville

On August 15, six members of the Joomla! community came together in Nashville, Tennessee, USA to begin four days of collaboration and sharing Joomla with the local development community. 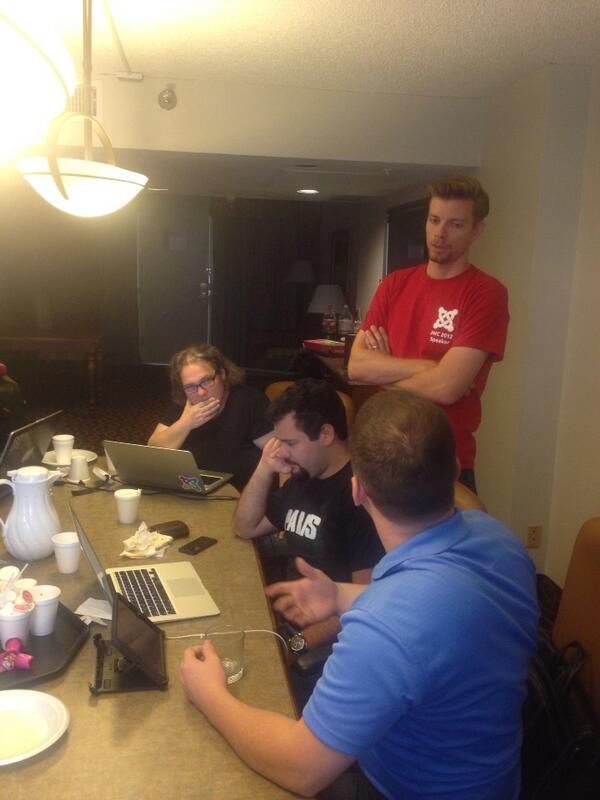 The collaboration began on Thursday morning when Michael Babker, David Hurley, Elin Waring, Tessa Mero, Chad Windnagle, and Don Gilbert came together to begin the Joomla Code Sprint.  After discussing where the priorities of focus needed to be and who would be working on what, the team quickly got to work on their various code projects.  During the first day, the focus was on reviewing the CMS Feature Tracker, working on complicated bugs deep in the system, finalizing the Dependency Injection package for the Framework, and numerous passionate discussions about how the CMS could begin to implement Framework based code.  Though this doesn't sound like much, Tessa and Chad alone tested and reviewed nearly 50 feature tracker items, including most of the currently proposed code from this year's Google Summer of Code students.  The collective team worked this first day until nearly 1 AM before finally calling it a night.

On Friday, the effort continued along this same path and the CMS saw the first two pull requests opened based on the Framework integration discussions from the previous day.  From this, starting with CMS 3.2, Joomla's class autoloader will be able to load classes that are namespaced according to the PSR-0 standard and will be able to handle class aliases.  During the day, the remaining code from the now retired Joomla Platform repository was merged back to the CMS, and CMS 3.2 will now be running on the final release of the Platform, version 13.1.  Lastly, time was dedicated towards improving the automated testing and continuous integration for the CMS.  This included finding and resolving issues that prevent the unit test suite from running on the recently released PHP 5.5 and updates to our Jenkins CI server to enable running the CMS's Selenium system test suite.

By the end of the code sprint, the team collectively had reviewed and tested nearly 100 tracker items between the feature and issue trackers

After a highly productive code sprint, the team shifted focus and attended the CoderFaire conference over the weekend.  As a sponsor for the event, we represented the Joomla project and had the opportunity to network with local developers in the Nashville area and talk about the project's code.  During the event's first day, I presented a session entitled "Getting Started with the Joomla Framework" which gave us the opportunity to highlight the efforts of the Framework project during the course of 2013.  While we were there as representatives of Joomla, we also took the opportunity to learn and attend sessions that piqued our individual interests.  Collectively, we attended sessions detailing the HTTP 2.0 proposal, websockets, and working with code compilers.

Given CoderFaire's status as a developer conference, we had unique networking opportunities which allowed us to discuss code with various members of the PHP community and collaborate with developers representing Mozilla, Mashery and GitHub among others about their services.  Although none of the Joomla team officially participated in CoderFaire's Hack-A-Thon, everyone was busy hacking away at code and taking opportunities to learn from other conference attendees.  The time allowed everyone to work on projects that interested them and resulted in many commits to their respective codebases.

The morale coming out of CoderFaire was excellent for everyone involved with our only regret being we had to leave the hack-a-thon early to head back to our respective homes.  On behalf of our team, I'd like to again thank Cal & Kathy Evans, Jacques Woodcock, and everyone involved in putting CoderFaire together this year for a great event, allowing us to participate in the event, and to let you know we're already looking forward to next year.